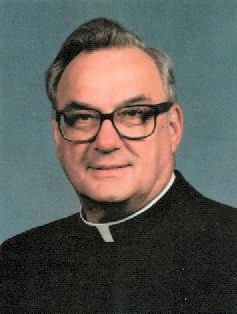 Born in South Attleboro, MA, Father was the 7th of 10 children of Bronislaw and Adolfina (Zamoida) Iwuc. Father was predeceased by his brothers, Frank, Joseph, Stephen and Edward and his sisters Stella, Lottie, Jane and Jessie. He is survived by his older brother, Charles Iwuc of South Attleboro, MA and several nephews and nieces.

Early on Father was recognized for his keen intelligence and exceptional memory and as a diligent and earnest student. Father received a 3-year scholarship to St Raphael Academy, received a general excellence medal, and athletic letters in baseball and basketball.

Active ministry included service as Administrator of Our Lady of Czestochowa Church in Coventry, RI from 1953 to 1972 when Father was made pastor of his home parish, Saint Joseph’s in Central Falls for 33 years from 1972-2005.

In his retirement, he lived at St. John Vianney Residence in Providence, RI where he served local parishes, and the Aime Forand Manor in Pawtucket, RI and the Franciscan Missionaries of Mary in North Providence, RI.

Father’s organizational skills were always in play. He was Founder and Moderator of the Orchard Lake Schools Ladies Auxiliary. Father organized pilgrimages to Rome, Poland, the Holy Land, Fatima, Lourdes and Mexico. Father was present in Rome for the election of Pope Saint John Paul II and, for years organized the annual Polish Pilgrimage at LaSalette Shrine in Attleboro, MA. He organized the construction of Our Lady of Czestochowa School in Coventry RI. Father renovated and modernized the interior of St. Joseph’s Church, and also purchased a new organ for the Church. He also was responsible for the purchase of the former Central Falls Congregational Church which is now the St. Joseph’s Church Parish Center. He also organized the annual Polish Parish festivals, and organized the annual Pulaski Day Memorial at Roger Williams Park in Providence, RI. Father conducted the annual census of St. Joseph’s Parish on foot – going house to house to meet the families. Father’s gentle nature, sense of humor and personal charm attracted people to God and the Church. Father had great compassion for the elderly, sick and less fortunate. Every year at Christmas, Father would go house to house with St. Nicholas for a visit of cheer and singing polish songs. Father was a champion for the Holy Rosary.

Father was recognized for his many contributions with the following awards:

Relatives and friends were welcome to attend a Concelebrated Mass of Christian Burial Thursday April 8, 2021 in St. Joseph’s Church 391 High Street Central Falls, RI at 12:00 p.m. (noon). Calling hours were held in the Church from 10:00 a.m. to 11:45 a.m. BURIAL WAS FOR FAMILY MEMBERS ONLY.

A service summary is not available

There are 4 photos available in the gallery

REV. CANON ANTHONY S. DOMINIC IWUC will remain in our hearts forever Father was more than just a priest. He was a priest's priest. He was a living legend and now is rewarded with eternal peace.


A Grove of 3 Memorial Trees was planted in memory of REV. CANON ANTHONY S. DOMINIC IWUC

It is with great sadness that I learn of the passing of Fr. Iwuc.  It was an honor to have known him and be in his esteemed presence.  May he rest in peace and watch over us during our stay here in the physcial world.  Always in our thoughts and prayers.

Fr.Tony, will be sorely missed, he was very faithful in everything he did.
The best tribute I can think of is.....the was a HUMBLE  person,
HE WAS A PRIESTS PRIEST.   .........MAY HE REST PEACEFULLY IN THE GENEROUS HANDS OF Jesus in paradise.....    God bless his family at this sad time in their lives.

Our thoughts and prayers are with all of you at this most difficult time. Father Tony will always be remembered for his kindness and his true love and devotion to the Blessed Mother.

Barbara and Ron Toboy and daughters

Our deepest condolences to the family and friends of Fr. Tony. He was a remarkable priest, friend, and human being. He will be fondly remembered for his humor, his singing and his genuine care and concern for others. I had the honor of attending his 50th and 60th Anniversary of Ordination and was truly moved by his faith and compassion to the Central Falls and St. Joseph Church communities. We love you Fr. Tony. Until we meet again, rest in peace.